The traditional Seinfeld Festivus did not include any songs, but some people just love to sing. There is probably enough here to inspire you, so you can croon about Festivus between now and the 23rd of December.

‘O Festivus,’ Costanza’s day, for the rest of us

Here is a Festivus standard, sung to the tune of ‘O Christmas Tree.’ If you are planning a Festivus sing-a-long, we have more holiday songs that have been given the Festivus treatment on our songs page. 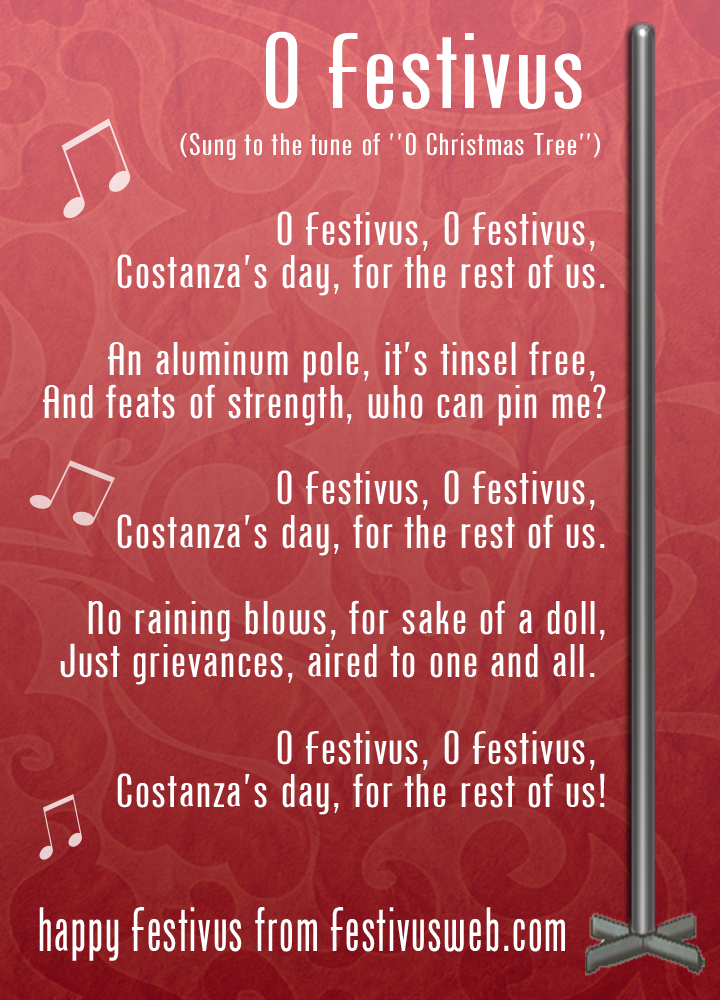 ‘O Festivus’ a Holiday for the Rest of Us

This is a song about something – the holiday of Festivus from Seinfeld. It’s a song for the rest of us. Written by Paul Westbrook. Vocals by Marc Toussaint.

Duxoop wants everyone to have a “Hip-O-Festivus” through his witty parody of the Gayla Perry standard, “I Want a Hippopotamus for Christmas.” Imagine if Duxoop was to show up and perform this at your Festivus party? It would truly be a Festivus miracle!

I wanna air my grievances on Festivus
I’ve got a lot of problems with all of you
My son George, he disappoints me a lot
And as for you over there…um, I lost my train of thought (but)

I wanna perform a feat of strength on Festivus
I’m ready for a wrestling match or two
There’s no big jolly elf coming down the chimney
Instead we’re gonna see if anybody here can pin me
And Festivus isn’t over ’til you do!

There’s no trees or wreaths, or ornaments that are spherical
They ended the strike at the bagel place…another Festivus miracle!

Festivus is your heritage, son, even if you hate it
And now let me explain the reason I had to create it

There was one last doll on a shelf and someone else grabbed it one day
As I beat him for that prize, it was then I realized
That there just had to be another way

I want my very own holiday called Festivus
Only my Festivus holiday will do
Other holidays can take their toll on the best of us
That’s why I created a Festivus for the rest of us
So Happy Festivus to all of you!

What’s the deal with ‘Seinfeld, The Musical?’

A Seinfeld musical exists in concept only, but if it did exist, this is what the Festivus song would be.

“Frank Costanza’s show-stopping number ‘Festivus’ from Seinfeld: The Musical, which is not real.” Music & Lyrics by Ben Kling, who is real. Another Festivus miracle!